Anxiety and depression: the body's barometers 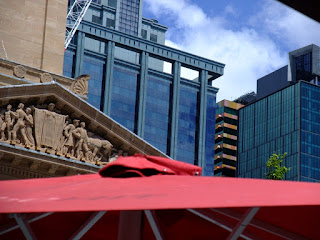 Today, the stasis returns to tell me all of the stories of disempowerment. How do we become so infused with disempowerment? Perhaps we learn it’s safer to sit still, because otherwise you might fall. Pride comes before a fall. Defiance loses her grip and gets thrown around by forces greater than herself. Anger screams and isn’t heard. She rises up and isn’t seen.

“I know better” is an affliction. Whichever way you apply it, you’re equally culpable. I look at social media sometimes and find an enlightened being telling me how to live my life. This reminds me of disempowerment.

It’s important to me that a person with knowledge does not assume to be more knowledgeable than anyone else. That’s because a fundamental core of my beliefs and my practice – ideally – is to honour that every being has lived experiences. None of those experiences are more valuable or more important than others.

The only person with any right to determine the importance of an experience, is the being who has lived that experience. So don’t tell me which experiences of mine are important, and I’ll pay you the same respect.

It's frustrating that there is an archetypal force that lives in me (along with a trillion others): the archetype of the guru. When someone calls me a wise woman, it is meant as a compliment, but it sits uncomfortably, because who is to say I’m comparably wise, compared to what, compared to whom? I have habits of thought, action and emotion that are so limiting, and no matter how much I reflect on them, and pinpoint and bookmark and try to work them out, they arise again.

So, as a practitioner, all I can do is offer you my expertise, which is simply my lived experience. I undertake to make no judgement on yours. I undertake to respect you as a sovereign being. There is enough space within me (because I am the earth, as are we all), to receive all that is happening with you in this moment, or at least, all that is allowed to be seen, sensed, gradually revealed, in this moment. It is an honour to know you in this way, to be with how you really are.

My grander vision is for us to understand our reality with less illusion, to live our potential more fully, to move through the world more easily, more resilient to the shocks.

For years, I worked in office blocks and towers, in a very superficial world known as “communications”. It was a world in which I didn’t move, creativity was worn down and the “security” of the gilded cage was enough of a carrot (apologies for mixing metaphors) to keep me from noticing the stick: the anxiety, the depression; in other words, the suppression of spirit, of self.

Yesterday, a former colleague and old friend of mine, another who went through a major burn-out while in the same industry, interviewed me for academic research. She is investigating the phenomenon of burn-out in communications and PR (I guess we are carrying out the wounded healer responsibility in our various ways). It was a MASSIVE conversation.

When my friend asked what might be needed – in organisations and in individual situations – to transform the culture that leads to this phenomenon, I had a lot to say (it seemed to bubble up from some very deep, swampy place). In a nutshell, the solution I see is for people to get real, to stop living in constant denial, to embrace anxiety and depression as the body’s barometer that something isn’t right.

In the conversation, I had the opportunity to talk about the places where I used to work until about six years ago – the cubicles in high-rises in Brisbane city / Meanjin, where people in positions of colonial power made arbitrary and uninformed decisions about Indigenous communities, about what pieces of our environment were to be saved, and what pieces destroyed. I witnessed how even the advice of experts with university training was ignored, and this was acceptable, for example, when coal seam gas exploration was first allowed in Queensland.

I did the latter – divorced myself – because I watched people making policy decisions on whims, treating scores of talented people (included myself) as dehumanised foot soldiers, treating those affected by the decisions as existing in a faraway and unimaginable universe. I felt complicit, because my role was to sell the spin. I couldn’t bear the pain of that, so I squashed it for as long as I could ... until it sprang into action and chased me.

The healing journey took in many experiences, from the acute treatment of antidepressants, naturopathic remedies and talk therapy, through journeys into nature and into the physical reality of my body and my mind, to a growing sense of self and a growing confidence in truth and resilience.


Ultimately, these things known as anxiety and depression woke me up, and gave me a shove in the direction of returning to myself and sovereignty: a clearer sense of reality (without the spin!). That is what I wish to share.
Posted by Justine Reilly at 11:52