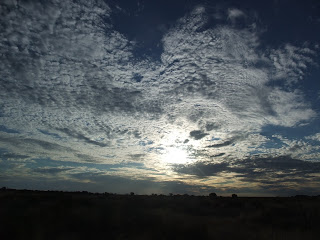 Today, I invited a workmate around for some one-on-one Feldenkrais practice on the table. She is a personal trainer, working with strength and fitness. She is aware of her body, but somehow she knew I was offering a different kind of awareness.

As we were entering a process of movement exploration, my friend made some very interesting observations. She noticed that the movements made her aware of loads of things she hadn't been aware of before - things going on in her. Because the touch was so unobtrusive and the movements so gentle, she was able to feel much more than she does in say, a massage. It seemed there was so much to notice, her mind could barely keep up.

That is what it's like to enter this kind of learning for the first time. It's discovering the tiniest tip of the biggest iceberg.

And I commented that she had hit upon one of the principles of this method, which draws on the Weber-Fechner law (aka the field of psychophysics, aka sense physiology). So basically, the quieter the room, the more you can hear in that room. If drums are being played loudly in the room, you won't hear a pin drop. However, if the room is completely silent, you will hear the same pin drop. (It gets more complicated if I try to explain it fully, but that is the gist.)

When you reduce the stimulus, when you calm the nervous system and quieten the mind, the doors of perception have the opportunity to open, expanding the options for how you experience the world.

Another very interesting thing my friend / colleague / guinea pig said was a question: she asked me about how I work. If I were to see a client like her, she asked, with all of this stuff going on, and the first visit was just about getting to know her - how she moves, what movement patterns are happening - would I then have something to work with on the second visit? Would I know what to work with?

The answer was an honest: "I don't know."

And then it hit me. I'm right at the beginning of my education in this field. I have been to multiple training segments (and, granted, haven't quite finished the training course), where I'm immersed in the method, travelling through states approximating confusion, euphoria, frustration and Eureka moments. Learning. But when I meet an individual, who has this pain, that constraint, this difficulty, I sometimes don't know where to begin.

So I'm going into the unknown. And that is the practice. Learning to go into the unknown. The only way I'm going to learn it is by bringing more and more curious souls to the table, to discover themselves in a new way for the first time, and - if they like it - maybe the second time and maybe the third time.

So today, although we took a few twists and turns in our exploration, and I wouldn't call the practice a "Functional Integration" (which is what a one-on-one Feldenkrais lesson is called), my guinea pig totally got what the practice was about, she found movement options she hadn't had at the start of the lesson (which completely surprised her) and she was keen for more. I guess you can call that success.

Note to self: it's like ATM. Start with the classics, learn your scales, ie. have a couple of solid FI lesson structures to refer to as a starting point.
Posted by Justine Reilly at 16:52 No comments: