Mum says go with the flow 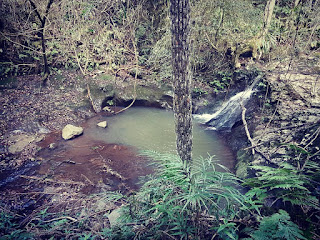 The world is changing before us. Sure, there's the obvious change, of human-caused global warming. There's the crescendo of neo-conservative imperialism (potentially before its crash), the rising up of people who have been pushed down and exploited by that imperialism for millenia. There is the way we passively receive information, and its control by the few rich white men, such as Rupert Murdoch and Mark Zuckerberg.

And there is the evolution of relationships. This is a brave topic for me to write about because it's one that I do not feel successful in. I have been single for much of my life, and along the way I have accidentally stumbled into some fortunate intimate relationships with some extraordinary (to me) people. This year has been different; I was no longer ready to just travel along until I happened to stumble. This year, I was just ready! I started to feel the now-or-never surging force that is female reproductive biology. This just so happened in 2017, which seems to be a time when Australians are going crazy for dating, but have no idea how to do it properly (by properly, I mean lovingly and with care).

I'm pretty sure this topic is exceedingly unattractive in some people's minds. "Ewwww, ageing women and their sexuality - gross!" they might say.

With some level of rage I say to them, without apology, this is reality. Some of us feel great ambivalence toward leaping off the cliff of having children. Those of us who are female in particular, reach a given age (perhaps late 30s - early 40s) and start to ask, what the fuck just happened? I was going to have kids by now.

So what did just happen? For me, I've witnessed and even been a part of a broad spectrum of experiences when it comes to falling in love, relationships, and raising children. I've seen people struggling tirelessly to raise children in poverty; people grappling with how to raise happy children under the auspices of a toxic relationship, or choosing to leave that relationship against their longheld wishes for a solid family unit; the adolescent fallout of resentful environments; people dealing with the horribly harsh societal judgments of how they choose to raise their children, how they choose to adapt to unexpected circumstances.

I'm part of a world where people feel entitled to ask me, because I'm a woman in my 30s, "Do you have kids?", no matter the personal story that might be associated with my "no". It's an area which, without a healthy relationship to bolster you, can feel a bit lonely and overwhelming and fraught.

Within a couple of generations, we are leaping from an idea of family that involved a man working and a woman staying home to raise children to ... every option you can imagine. The former is a great option. But as it turns out (and if only I'd realised this years ago), it's also a great option to be a single parent, or to be a same-sex couple raising a family, or to be a hetero couple where emotional / domestic labour is shared differently to in the old days, or to not to have children, or to live in an intentional community, or to commit to being an aunty or uncle, or planned co-parenting etc etc. We now have choice, and what makes any given option great is that it's your choice (in cases of people who feel so empowered), not someone else's plan for you.

In all of this, I'm but one woman who has taken a long time to start working it all out. I was raised in another era, by another generation. Often I feel like I'm moving through treacle, making little progress. But the progress is subterranean, and probably pretty rapid really. And it's led me to 2017, when I've been contemplating all manner of strategies: online dating (barf! - sorry, but that's been my experience of this nebulous phenomenon so far), discussions with single mothers by choice, discussions with rainbow families, discussions with a male friend about sperm donation.

It's led to me really considering how I want to spend the next 20 years of my life during this extraordinarily transformative era on planet Earth, when no-one really seems to know what the weather will be like in a few decades, nor whether having children is a major contributing factor to that, nor whether these kids of today will be dealing with a really trying time ahead.

In 2017, all of these conversations, attempts at dating, this practice of opening myself to possibilities, have led to massive dips in mood, the likes of which I can't recall experiencing (although we humans are good at not remembering shithouse feelings).

This morning I had a conversation with my mother, a woman who stayed home to raise nine children - with all of the joy and frustration of that. My mum has seen my tears, my grief at not being a mother when at times I know it would be the most natural course for my life to take. She's seen me helping to raise my nieces and nephews. And she has recently been touched by my loving (though you're probably not supposed to call it that) relationship with a child with a disability who I support for (some of) my paid work.

She told me I could talk to her about any problems. I said my problem was just the big one: I wanted a family. Straight away, in a moment of maternal saliency, she made a suggestion: rather than trying and searching and going to all this effort, and being disappointed, maybe I should go with the flow. And suddenly, I sighed with relief. I don't have to look at those dating sites, which seem to require superhuman resilience to interact with and still avoid depression. I don't have to strategise right now as to when I might have a baby and what method of conception I might use-because-otherwise-I-might-run-out-of-time. I don't have to question every time I see people buying consumer crap for their kids whether I'd just end up being a selfish contributor to global destruction, or whether I could be steadfast in navigating a course of child-rearing that feels truer to me. I don't have to decide today what course my life will take.

I am allowed to live from day to day, among the chaos and confusion, amid the red herrings, the information assault, the stress of survival in late capitalism, the unfounded dreams and futile comparisons: if only I could just be one of those enlightened gurus making money out of abundance consciousness in a heavenly forest retreat with sea views, all the while trusting the universe.

My reality is, writing always creates some form of resolution. The act of sharing these thoughts and feelings gives me comfort, in the knowledge that often such sharing creates resolution for someone beyond me, if only one soul.
Posted by Justine Reilly at 11:41 1 comment: